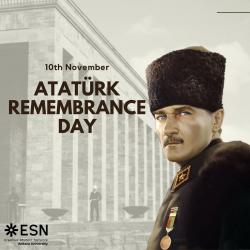 Mustafa Kemal Ataturk the founder of Turkish Republic passed away at 09.05 A.M on 10th of November in 1938.

He was born in 1881 in Thessaloniki. He became the first president in 1923 and that duration continued until his death in 1938. In 1935, when surnames were introduced in Turkey, he was given the name Ataturk, meaning 'Father of the Turks". When he died, he was 57 years old. He remains a revered figure in Turkey and his legacy is seen throughout Turkish life today.

Every year, at 09.05 A.M on the 10th of November, everybody in Turkey pause in silence and it continues for 1 minute to remember him.
Today is the 82nd death anniversary of him. We commemorate him with love and respect.