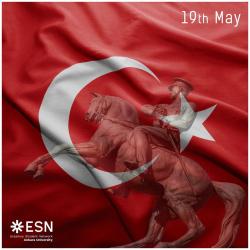 The founder of the Turkish Republic, Mustafa Kemal Atatürk, arrived in Samsun on May 19, 1919, to start a popular uprising against the decision of the World War I allies to divide many territories of the Ottoman Empire. Turkey presently accepts the date of Atatürk’s arrival in Samsun as the starting date of the Turkish War of Independence. Following Atatürk’s wish, the Turkish government declared May 19 to be Youth and Sports Day and made it an official holiday in 1938. The day received its present name, the “Commemoration of Atatürk, Youth and Sports Day”, in 1981, which became the 100th anniversary of Atatürk’s birth.#ESNankarauni #THISisESN